Professionalism, compassion and trust are the values that guide our Police Department. The department prides itself in providing a superior level of service to our 63,000 citizens. We have a sworn staff of 71 officers that continuously work to maintain a culture of compassion – working in partnership with our community as we strive to fulfill our mission to enhance public safety.

The three things that make our department great are: The immense amount of support we receive from the Coon Rapids community; Our reputation within the Criminal Justice profession; and the culture of our police family.

We began with 4 officers in 1957 – serving a population of 12,500. Since then, our staff and community have grown together. We continue to expand our commitment to community engagement and outreach programs. We also invest significantly in providing our officers with the best career enhancement opportunities possible, and use state-of-the-art equipment to ensure they have the tools they need to be effective public servants.

Thank you for visiting our website. It is you, the public, we serve each and every day. Together we can continue the important work of keeping our community a safe place to live and work!

Get to Know Chief Stahnke 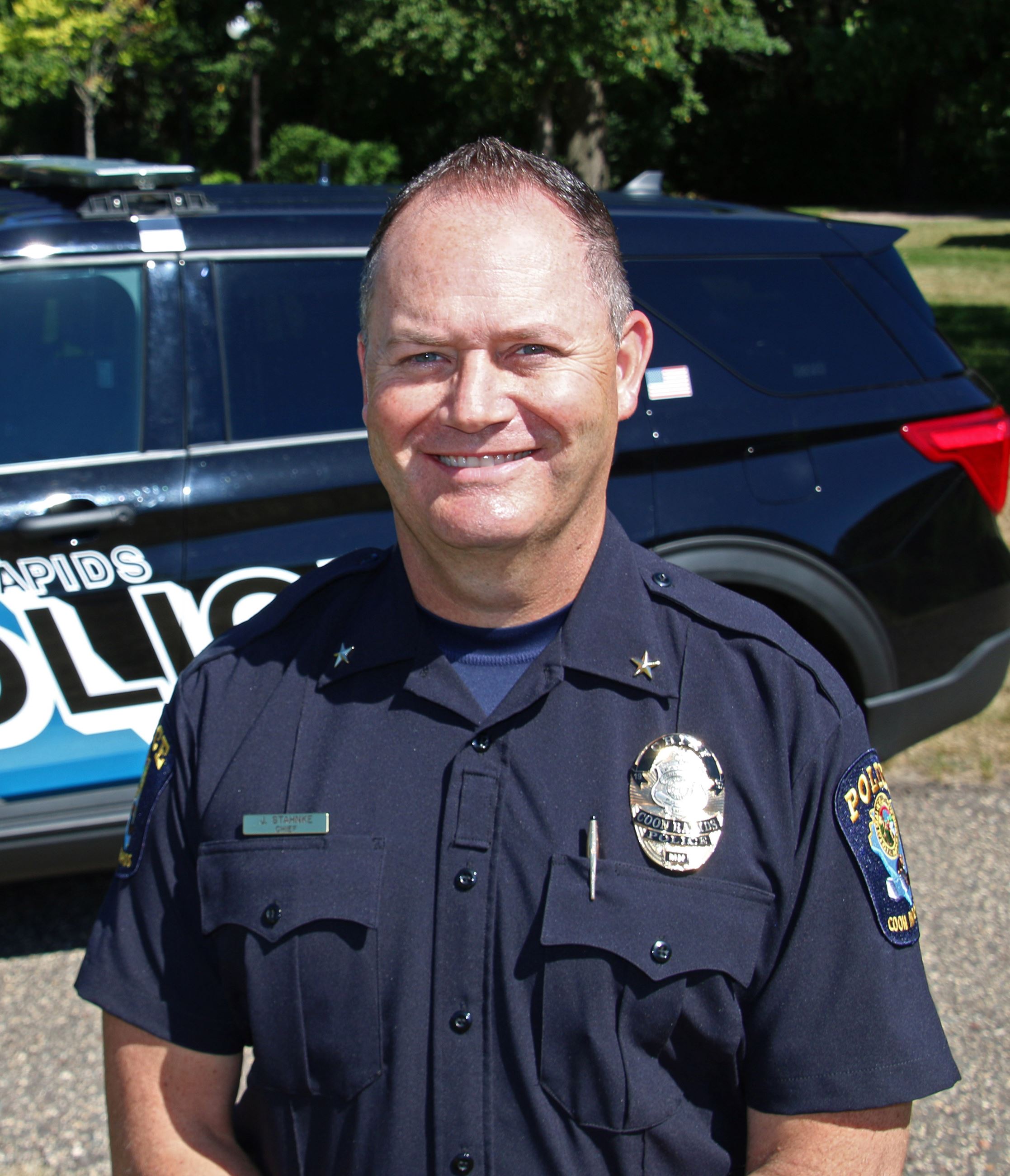 Chief John Stahnke has served in the Coon Rapids Police Department since 1993. He was a 29-year veteran of the department when he was sworn in as Chief of Police in July 2022.

Chief Stahnke grew up in Coon Rapids and first joined the police department as a community service officer. He was sworn in as a full-time police officer in 1995. Throughout his career, Stahnke has held both line and leadership positions in the Patrol and Investigations Divisions.  He helped create the department’s Mobile Field Force Team, and the UAS (drone) Unit. He led the Professional Standards Division, was the Deputy Director of Emergency Management and launched the department’s first Multicultural Advisory Committee (MAC) in 2021.

“It is truly an honor and a privilege to be trusted to lead our department into the future and carry on the tradition of excellence that the Coon Rapids Police Department is known for,” Stahnke said.

“Our agency is staffed by the hardest-working, most honest and ethical officers in the business. The level of trust and support we receive from the community and our elected officials is second to none. Our goal is to enhance relationships with our community partners through empathy, communication, trust and understanding.”

Chief Stahnke holds a Master’s Degree in Public Safety and Law Enforcement Leadership from the University of St. Thomas, is a graduate of the Minnesota Bureau of Criminal Apprehension’s Senior Management Program, and holds his Emergency Management Director/Practitioner Certificate issued by Homeland Security and Emergency Management.

How does policing in your hometown influence your job?

The approach I take to policing in this community is through many different lenses, because I am not just a police officer in Coon Rapids, but also a citizen.  I believe in taking an empathetic approach to decision-making and am fully invested in this community, therefore safety, security, and community partnerships will always be a high priority.   The officers who work for me know how strong my commitment is to this community, and I only hire the best candidates who I know will carry out that vision of service to Coon Rapids.

Why is it so important to foster a strong partnership between the Police Department and the community?

The success of any police department depends on the amount of trust and support it receives from their community.  This is accomplished through meaningful community outreach initiatives which encourage transparency and open communication, while striving for continued mutual understanding.  Public safety is a partnership and our agency will continue to foster and enhance relationships with all aspects of our community.

What are your hobbies?

My hobbies include fishing, hunting, four-wheeling, and spending time at the lake with family and friends.