The picture of the school on the mural is the old school house in District Number 2 was organized in 1856. The board and residents built the school which was the 2nd school built in Anoka County. The original school was located across from where the WCCO Radio transmitter station now stands.

In 1876, a new brick school, the one you see on the mural, was built at the present intersection of Crooked Lake Boulevard and Coon Rapids Boulevard. 2 other schools were built in Anoka Township, now Coon Rapids, in the late 1800s. 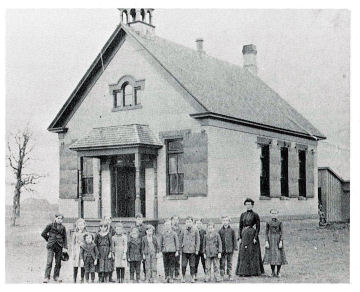 District Number 15 was located at the intersections of Foley Boulevard and East River Boulevard and District No. 50 was located on Northdale Boulevard across from where the present Sand Creek Park is now located. There were no paved roads in the early years, and transportation to and from school was by foot. Several miles were covered each way as pupils walked the dirt trails.

The 3 districts in Anoka Township plus 1 from the Blaine area consolidated in 1920 to form consolidated School District Number 2 located where the former L.O. Jacob School now stands.